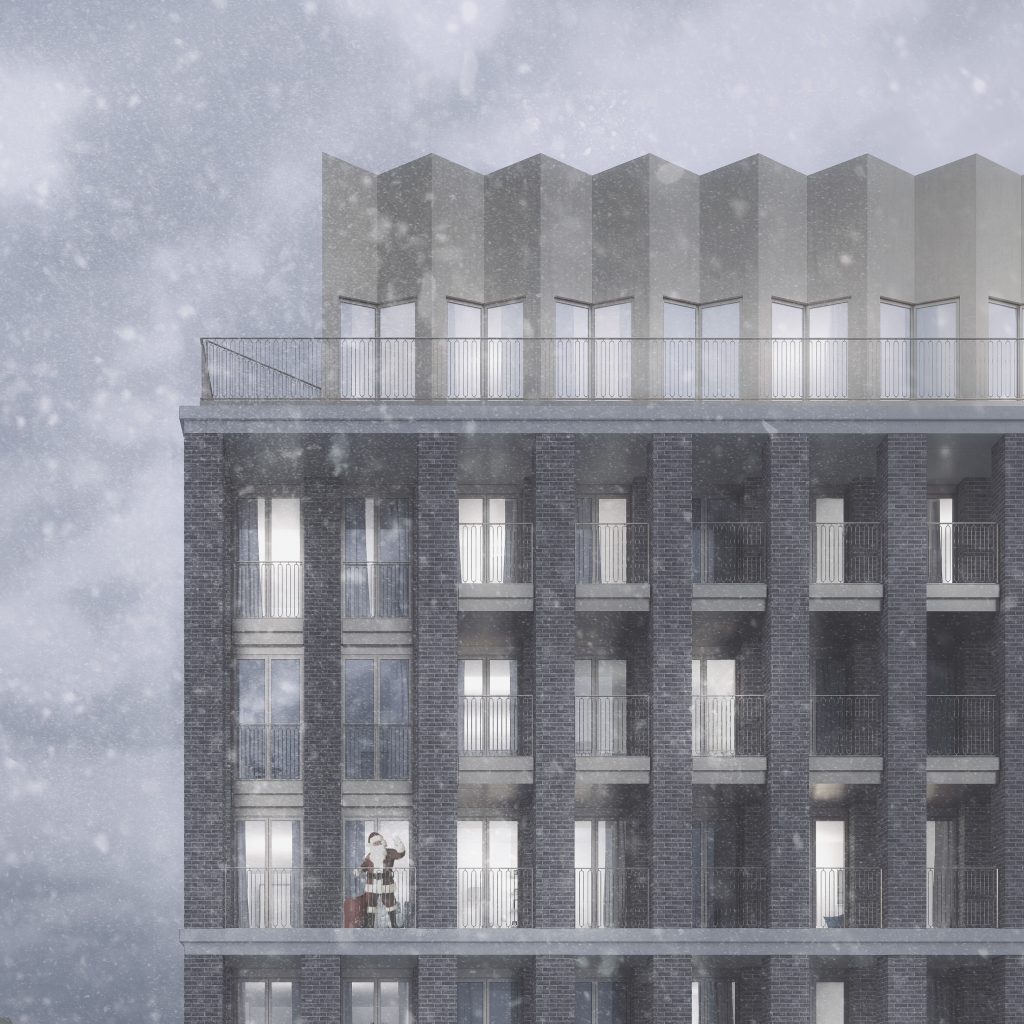 2018 has been a great year for Hutchinson & Partners. The team has grown by over a third, with Sabine, Liam, Anxo, Helen, Ben, Joseph, Maria, Paddy, Callum and Laura joining us over the course of the last 12 months together with Paige and Matt in breaks from their studies at Bath and Manchester. Our growth has also seen us knocking through into our fourth studio at our much loved and super flexible home at Workspace’s Record Hall.

We’ve seen several new appointments on projects, including a major mixed use scheme for St.George, the first phase of a masterplan for Ballymore & Sainsbury’s Property Investments, together with a series of co-working projects for LABS and the welcome return of our project in Brixton.

We’ve also seen two notable planning consents. The first being Chapel Square in Ilford for Sainsbury’s Property Investments in which we gained planning for a mixed use scheme comprising 683 new homes, supermarket, cafes, retail and commercial space set within a landscaped public realm. We were also very pleased to gain consent for 271 mixed tenure homes for Barratt and Metropolitan that forms part of the final phases of Allies & Morrison’s Hendon Waterside Masterplan.

2018 has seen us participating in a number of very enjoyable events throughout the year including our ‘Fragments’ exhibition that formed part of Clerkenwell Design Week, and our London Festival of Architecture Talk entitled ‘Living Above the Shops’ on the changing identity of mixed use. The year ended with our entry into the Museum of Architecture’s Gingerbread City, recreating a Palazzo Building from our Whitechapel Square project in the medium of gingerbread, complete with sugared ice rink and now on show at the V&A.

We have shown our support for a number of key organisations within the architectural world, including the Architecture Foundation and New London Architecture as well as the sponsoring of the University of Sheffield’s end of year show and the mentoring of students at Cardiff University’s School of Architecture.

It has also been a year of award nominations. In August we were shortlisted for a prestigious Archiboo Web Award and in October we were shortlisted as a finalist for best masterplan of the year in the AJ Architecture Awards. We were unfortunately pipped by UN Studio and Brick x Brick respectively, but we were honoured to be nominated alongside some significant competition.

The year has been topped off by the first phase of our 483 home Colindale Gardens Scheme for Redrow in Barnet starting on site.

2019 is already looking to be an exciting year, with projects in Barnet, Camden, Hackney, Haringey, Kensington & Chelsea, Lambeth and Lewisham. We’re also looking forward to taking part in a series of competitions and events throughout the year and to hopeful success in a competition that continues the practices interest in architecture’s ability to regenerate the ailing High Street.

Finally, the New Year will also bring with it the Secretary of State’s much anticipated decision on our Whitechapel Square mixed use regeneration scheme following October’s Public Inquiry.

We would like to thank all of our Clients, Collaborators and Mentors for their hugely appreciated support over the past year. We really are very grateful and humbled by the level of support we have received.